Answer : Tectonic Activity that occurs deep in the Earth’s core has not been taken into  control when taking such measurements. Also,the Earth is  a giant nuclear reactor and there are particles in the Earth’s core and throughout the mantle which are radioactive which also produce heat.So in actual fact, there is more heat generated that has not been considered. 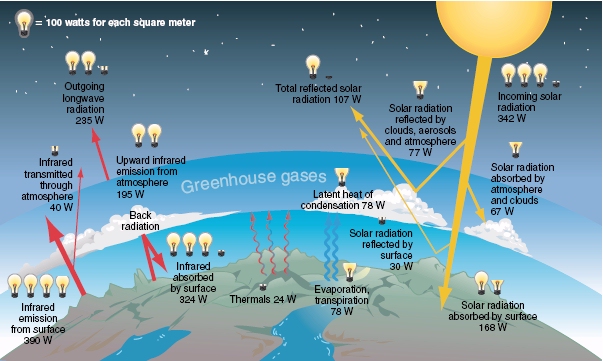 This picture further explains the earth’s energy balance. Based on the picture, it clearly shows that the earth does not absorbed energy solely from solar energy. Instead, there is a combination of solar energy and infrared emission from surface. When added both together, 168W/m^2 + 324W/m^2 = 492W/m^2, the energy absorbed by the surface is higher than the energy leaving the earth. As shown in the picture, back radiation and solar radiation reflected are also not accounted when calculating the energy that leaves the surface as not all actually does. This further explains why the earth is actually not cooling as fast as it should based on the above figures.

2) Do you think the statement made by the cartoon is justified? Explain. Answer :No. Despite the winter, the general temperature of the earth is still increasing.  It is important to note that winter is part of the whole seasonal cycle and climate and weather have different definitions.

The natural seasons we experience are a result of the Earth’s tilted axis as it revolves around the sun, and thus it has no correlation with global warming.

From the diagram above, it indicates how the axis of the earth has a direct correlation with the season at different part of the world. An example is point X, during winter, the location is further away from the sun and has a low angle and low intensity. As compared during summer, the location is nearer to the sun and has a high angle and high intensity.

To explain the recent blizzards or record snowfall, it is important to note that global warming will induce a ‘trend’ where the cold gets colder and the warm gets warmer. As such, the presence of winter will not counteract the effect of global warming. In fact, the extreme winters experience in recent years justifies the impact of global warming worldwide. This is because, warming causes more moisture in the air which leads to more extreme precipitation events. This includes more heavy snowstorms in regions where snowfall conditions are favorable. Far from contradicting global warming, record snowfall is predicted by climate models and consistent with the expectation of more extreme precipitation events.

3) One of the first radar devices developed during World War II used microwaves radiation of a specific wave range that triggers the rotation of water molecules. Why was the design not successful?

The mechanism behind how radar devices works is by emitting a wave at a certain wavelength via its transmitter, and the wave will bounce off a solid object and reflect back to the detector without having interactions with the objects and detected by the receiver. This time elapsed for the waves to travel to and fro is then converted into distance by the devices. If in an event, where the wave radiation triggers the rotation of water molecules, the energy transfer required to trigger the rotation will cause the energy of the wave to dissipate. With this dissipation of energy, there will not be any return ‘echo’ waves, and thus would not be able to generate a distance information between the molecules and the device.

4) Now That you have studied air quality ( Unit 1) , stratospheric ozone depletion ( unit 2) , and global warming ( Unit 3) , which do you believe poses the most serious problem for you in the short run? In the long run?

Air quality would pose the most serious problem in the short run. Poor air quality will immediately have a direct impact to our respiratory system. For instance it will trigger asthma attack on asthmatic people, and also causes a direct health risk for the young, elderly and immunological impaired. However, air quality can be improved through regulations and quality control using filters and cleaner agents relatively easier. The effect are also able to be cured or prevented easily hence in the long run, it will not pose much of an issue.  In the case of ozone depletion, it can allow the UV rays from the sun to cause serious health problem such as melanoma but its effects are usually long term as compared to air quality. It is also said that Ozone will be fully replenish in the next 60 years and only certain part of the world is affected by it thus it will not be a problem in the long run. This leaves global warming being the most serious problem in the long run, global warming have significantly slower impact to the world and does not seemed like  a pressing concern to many. with one of the consequence of global warming which is the rising of sea level. Given the abundance of low-lying cities worldwide such as miami, guangzhou, osaka. Flooding caused by climate change, specifically global warming is going to affect billions of lives worldwide. The solutions to counter global warming also require tremendous effort and collaboration among all of us and has not been proven efficient and effective enough. At the rate it is going, its effect will continue to worsen faster than we can remedy and prevent. Thus, in the long-run global warming will be the most serious problem out of the three.