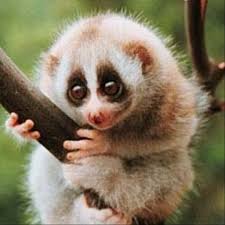 Most people take a look at the slow loris and can’t help but go, “Awww.” Their big, doe eyes and teddy bear like face make them the very epitome of cute. However, this adorable primate is facing extinction at the hands of mankind; illegal wildlife trade, deforestation and habitat fragmentation are just some of the many causes of the rapid drop in slow loris population that are threatening the survival of this species.

In fact, each of the slow loris species that had been identified prior to 2012 is listed as either a “Vulnerable” or an “Endangered” on the IUCN Red List. The three newest species are yet to be evaluated, but they arise from (and further reduce the ranks of) what was thought to be a single “vulnerable” species. All four of these are expected to be listed with at least the same, if not a higher-risk, conservation status.

Here’s an overview on the plight of the slow loris today: