According to FAO (Food and Agricultural Organisation of the United Nations), at least 90 percent of freshwater aquarium fishes are bred in captivity. However, the accuracy of the statistics is unreliable especially when most of the ornamental fishes are wild-caught. The collection of wild fishes is a source of valuable income for those who live in regions where other trades are lacking. However, this has reverse impacts on the population of the species such as the rapid depletion of the wild population due to over-exploitation. 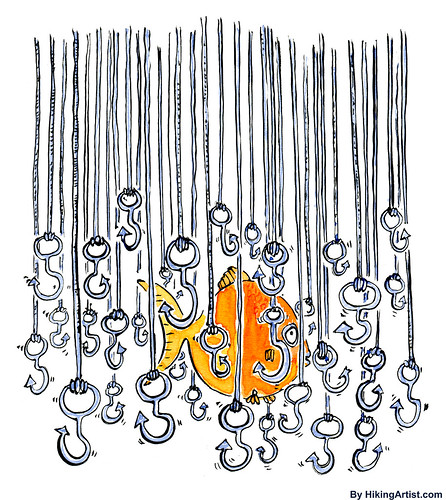 Historically, wild resources such as the freshwater fishes were overexploited rather than managed. In Philippines and other parts of Southeast Asia, overexploitation of freshwater fishes and the use of cyanide to stun the fishes in order to increase profits have been widespread. This is a classic example of the “tragedy of the commons”. Many of these fishermen and middlemen earn their livelihood and profits from the collection of fishes for aquarium trade. In order to understand the reasons behind their behaviour, we ought to first understand how does “tragedy of the commons” underlie this devastating issue.

Tragedy of the Commons happens when individuals forsake the well-being of society or the group’s long-term interests to pursue one’s personal gain by depleting the common resource. In this case, the common resource is the wild population of the freshwater fishes.   Many of these fishermen and middlemen view the wild population as an extensive resource for them to gain profit through the aquarium fish trade. However, if they were to concerned themselves with the conservation of this resource and the long-term benefits of the group, they will have to limit their collection of fishes or to stop the use of cyanide which is able to help them maximise their profits with the least amount of effort. This carries little incentives for them to do what will benefit everybody in the long-term, hence in fear of losing out to their neighbours, they would rather pursue what benefit them the most without a care if their actions were to deplete the common resource, rationalizing that their contribution to the issue is small.

Understanding that people tend to act upon what offers them the most incentives, we can establish solutions that are advantageous to both the fishermen and the conservation of freshwater fishes.