Cyanide Fishing is a destructive method used by many fish collectors for live fishes for the aquarium trade. It involves a sodium cyanide mixture into the target fish’s habitat in order to paralyze the fish. This practice not only harms the target species, it also destroys surrounding organisms, such as the coral reefs.

As this method of fishing makes collection easier, many fish collectors still employ this technique despite being encouraged to use nets by the International Non-governmental Organisations. This use of cyanide for collection of live fishes to earn a livelihood through aquarium trade has been widespread in Southeast Asia. 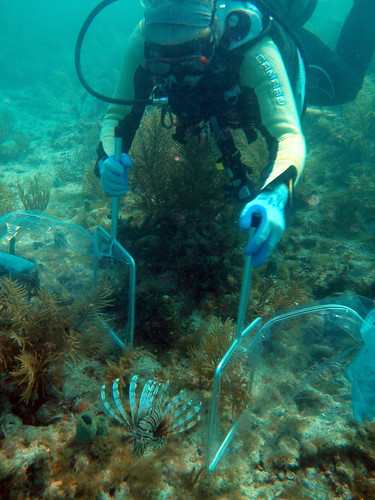 Florida Fish and Wildlife, from Flickr.com

Fish collectors chose to use cyanide as their fishing technique because of the competitive benefits in terms of cheaper production costs.  Cyanide use is the result of higher profits for industry organizations and middlemen who are not concerned about the destruction they are causing.  Also, many fish collectors, who are trained to use the nets as a less harmful fishing technique, reverted back to using cyanide as they will be able to capture more fish and gain more profit for a lower level of effort.

Why should any fisher make forfeit the opportunity to earn more benefits just to protect a marine ecosystem when a fellow fisher can earning more money easily by relying on harmful practices such as the use cyanide? This depicts a classic example of “Tragedy of the Commons” which will be elaborated further here. Though laws have been passed to prevent the use of cyanide in some areas, there are still more incentives to the fishers to catch the freshwater fishes in an ecologically harmful way than an environmentally safe way. A change in this situation may require the increase of incentives for using the environmentally desired method which will convince the fishers to give up the use of cyanide.