Southeast Asia is the hub of ornamental fish trade, providing up to 85 percent of the aquarium trade, estimating a total trade of between US$300-400 million in aquarium fish species. Locally, Singapore is estimated to export US$80-90 million worth of fish annually. The threats to freshwater fishes are not just deforestation and the loss of habitats, pollution and the introduction of invasive species, the Aquarium Fish Trade is one of the threats that has led to the over-exploitation of freshwater fishes in Southeast Asia. 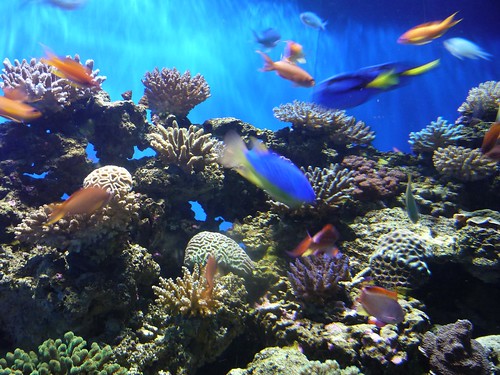 Birch Aquarium by TQT, from Flickr.com

Keeping aquariums is presently widespread and popular due to various revenues such as tourism, hobbies, decorative purposes of bringing relaxation in dentists waiting rooms, shopping centres and restaurants. It is no wonder that this profitable aquarium trade is exploiting the wild population in Southeast Asia for the past many years. Though much of the “official” trade is farm-bred species such as guppies and goldfish, it does not mean that the wild caught species were not worthy for our attention. In fact, 90 percent of the trade includes tropical freshwater fishes of which all but 10 percent are bred in captivity , while the rest consist of wild-caught species.

Just like any other natural resources, contradicting points of view about utilizing this resource is typical. While economics suggest that the trade should be broadened, by increasing the quantity of species being exported, conservationists disagree that the wild population should be left alone and conserved. However, in reality, a compromise has to be established.