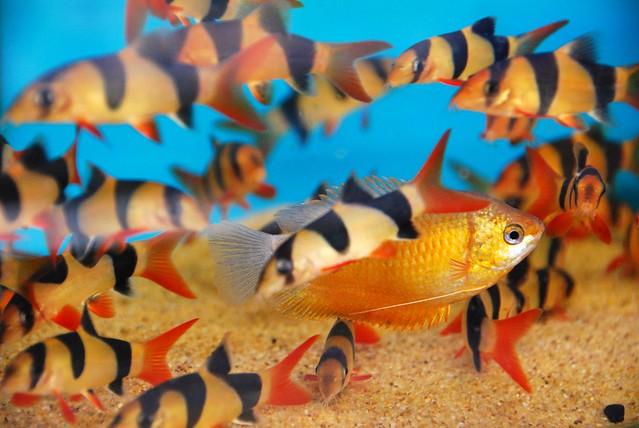 The Clown Loach is one of the most popular fishes in the aquarium fish trade and it is a Category I species. It is named “clown loach” because of its strange habit of entertaining its aquarium owner by swimming upside down and playing dead. The young species are found mainly in the huge rivers in central Sumatra, west and central Kalimantan during high water seasons as the adults breed at the start of the high water season. The preferred size range by aquarists is three to eight centimetres as specimens larger in size are inclined to be more carnivorous and are non-adaptive in community tanks. However, the most marketable size range is from two to four centimetres because individuals are mostly caught as they come downstream from their breeding grounds upriver at this size. Moreover, the Clown Loach is easier to breed in captivity and fed with available fish feed at this size.

In Sumatra, Clown Loaches are captured using bamboo poles that are perforated by sticking them into the bed of the river bank. The size of the perforations aim to only obtain fish of a certain size range. The collector will then collect at regular intervals by lifting the whole pole out and pouring out the contents into containers or directly onto the boat’s bottom. The catch will be sorted and relocated into holding tanks, before selling to a middle man. In Borneo, the technique mentioned is used with variations. A bunch of split bamboo poles are bundled together and sunk to the river bank substratum with stones. Fishes tend to seek refuge in and amongst the bamboo poles. The collector then lifts up the whole pole and shake out the fishes into a container, resulting stress inflicted onto the fishes.

Though the Clown Loach has been severely exploited in Sumatra and west Kalimantan for the past 20 years, there are still a good number of the species in the wild as the nature of the fisheries and the market help to preserve the wild population, and with the aid of governmental control on its trade. However, if technology for the conservation is not advanced, the Clown Loach may face extinction due to unethical fishing means and habitat destruction.