Another issue apart from pollution is energy conservation. As our energy resources are depleting, it is important for us to conserve energy. In Singapore where there are no fossil fuels, energy conservation is even more of an issue to us.

In April 2013, the Energy Conservation Act (ECA) took effect in Singapore. The Energy Conservation Act aims to provide an impetus to large industrial consumers to increase their energy efficiency and reduce the impact of their greenhouse gas emissions. Large energy consuming companies are also required to adopt energy management practices so that the government can look into their problems.

The oil industry in Singapore accounts for 5% of the gross domestic product (GDP).  Singapore is also one of the world’s top three export refining centres, accounting for 68.1 million tonnes of oil exports in 2007. Thus, it is important for us to look at the costs of these oil industries in the environmental aspect.

ENERGY INDUSTRY IN SINGAPORE. (n.d.). Retrieved on 27 March, from https://www.edb.gov.sg/content/edb/en/industries/industries/energy.html

Air Quality and Targets. (n.d.). Retrieved on 27 March, from http://www.nea.gov.sg/anti-pollution-radiation-protection/air-pollution-control/air-quality-and-targets

Fractions that are produced by the distillation of crude oil can go through a process called cracking. This chemical reaction produces smaller hydrocarbons, including alkanes and alkenes.

There are a several types of cracking – Thermal Cracking, Catalytic Cracking, Hydrocracking etc.

Polymers and ethanol from oil. (n.d.). Retrieved March 22, from http://www.bbc.co.uk/schools/gcsebitesize/science/aqa_pre_2011/oils/polymersrev2.shtml 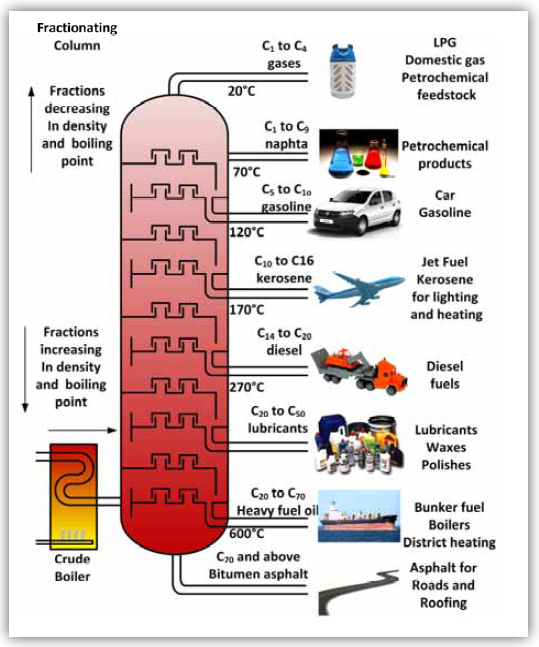 The steps of fractional distillation:

Crude oil, commonly known as petroleum is a liquid found in Earth’s crust and is made up of hydrocarbons, organic compounds and small amounts of metal.

The remains of animals and plants in the sea were buried under sand and rocks where decomposition will occur. During  decomposition, certain chemicals such as phosphorus, nitrogen and oxygen will be removed by tiny bacteria. This leaves behind the remains that are mainly made up of carbon and hydrogen. At the bottom of the ocean there is insufficient oxygen for the remains to decompose entirely. Hence, what we are left with is the raw materials for the formation of petroleum.  In addition, over millions of years, the heat and pressure, without air, convert the remains to oil. In this process, gas is also produced.

Today, oil companies drill down deep into the sea bed through the impermeable rock to obtain crude oil through the process of fractional distillation.

How crude oil was formed. (n.d.). Retrieved March 22, from http://www.bbc.co.uk/bitesize/standard/chemistry/materialsfromoil/how_crude_oil_was_formed/revision/2/

4. The concerns of acid rain vary across the globe. Many countries in North America and Europe have websites dealing with acid rain. Either search to locate one(“Canada,acid rain”) or use these links to website in Canada , the UK or Europe. What are the issues in the country you selected? Does the acid rain deposition originate outside the borders of the country? Our energy supply comes mainly from fossil fuels, with nuclear power and renewable sources rounding out the mix. These sources originate mostly in our local star, the Sun.

This unit studies how the chemical industry applies key principles of physical chemistry in order to turn research ideas into profitable products without harming the environment.

An increasing share of future energy needs will be met by technologies now in the research or development phase.

Public and private research into technologies that could improve—or even completely change—our energy situation has been active for years. This tells unit explains how energy affects our quality of life in now and in the future. There is a growing dependence on increasingly scarce Middle Eastern oil as countries industrialized and urbanized. Essentials like oil, coal and natural gas becomes imperative to a nation’s development.

Introduction :
Chemistry and energy has become increasingly important and relevant in our daily life. Its uses and applications have established a strong implication and relationship with our society. Its presence in life is distinctive and huge.

Explanation :
In chemistry, Chemical energy is the potential of a chemical substance to undergo a transformation through a chemical reaction or, to transform other chemical substances.
The products of chemistry save energy by improving energy efficiency in our homes, offices and factories and by making cars and packaging more lightweight.
Chemistry innovations also enable the sustainable technologies that are revolutionizing the way we generate and store energy—solar cells, wind turbines, rechargeable batteries and more.